You are here: Home / Trader Improvement / The Best Pressure-Reliever for Your Trading 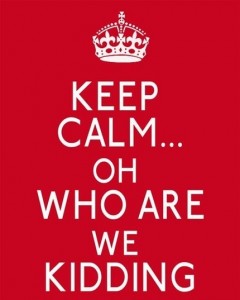 During a recent conversation with a trader, I was asked how I handle the pressure of making a living trading when I have not just the standard monthly expenses but a family as well.  As I relayed my answer and spoke honestly about what it was, it hit me that I needed to share this with you, because for whatever reason I just don’t think I’ve done so before.

But first, I’ll introduce another element to this concept to add validity to my point:  a long-time trading friend.

Months ago, I had traveled to a different part of the country to speak at a trading event.  In planning for that travel, I made plans with this friend who lived near the city I was flying into.  He invited me to come stay with him for a few days to discuss trading and life, to play golf, and just enjoy some down time.  It was a wonderful time and he and his wife were phenomenal hosts.  I was so glad I went.

This is a trader who has been full-time even longer than me, and he’s been highly successful.  His annual income would impress many, but he doesn’t live an extravagant lifestyle compared to his income.  His home is well-furnished and certainly very nice, but not ostentatious.  He drives nice cars, but they’re affordable – and paid for.  And he likes discounts (he even had a coupon we used for a discount on a round of golf).  He could be living much bigger.  He could be driving a 6-figure car.  He could live in a house several times larger than he does, or even maintain multiple nice homes in different parts of the country, but instead, he and his wife choose to live well within their means.

Imagine that!  Imagine what that one thing could allow you to do and the freedoms that single mindset could bring you.

As simple as it is, this notion of spending far less than you make can be absolutely magical.  It’s not a ground-moving principle;  I certainly am not the first to discuss it.  But living it can relieve you of tremendous pressure as a trader.  This is a wonderful concept for anyone to adopt, and in doing so, much frustration can be avoided.  But for the trader who desperately wants fewer emotional ups & downs and less pressure, it’s absolutely necessary.

So, back to the conversation…  I told the trader I was talking with that my wife and I are both frugal people.  We’ve both been savers our whole lives.  The fact that we see eye to eye on expenditures makes this far easier.  (If you’re single, keep this in mind when that dating relationship gets more serious!)  And if you’re already married, have an honest discussion with your spouse to find some ways you can cut back on your monthly expenses – thereby making it that much less difficult to extract what you need each month from the market.  But it’s important to understand that we aren’t in the habit of living the jet-setter lifestyle based on some good trading.

The fact is that going up in lifestyle is far easier to do than to go down a step or two.  Stay where you are as long as possible, and think very carefully before expanding your lifestyle to fit your income!

Traders often have a great year and are quick to live up to it by purchasing a new ride or taking a big vacation or buying whatever they want just because money is suddenly more available.  But spending what you make, paying the tax bill, and then getting off to a poor start the following year brings a harsh reality with it.  All of a sudden, the expectation has been set for more and more stuff, but the market will at some point put you on your heels.  That’s pressure, and it can be avoided.

So take it not just from me as a full-time trader since 2000, but also from my friend who has been at it since 1999:  living within your means is the simplest way to reduce the pressures on your trading.  Doing so lets you pick and choose your spots with greater ease, grow your account faster, and stress less when the rough patches come.

Trading is tough enough already without adding more pressure to the equation.  Your ability to remain level-headed and calm during times of elation or desperation will help you make better decisions, thereby keeping you in this game for the long haul.  Stepping away from the market periodically for some down time is refreshing and it should be done, but living within your means on an ongoing basis can bring you stress reduction that lasts.