You are here: Home / Trader Improvement / Stepping in the Bucket 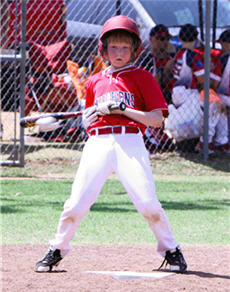 “Don’t step in the bucket!”

That’s a phrase I remember hearing from my little league days as the pitch would come in and I’d step toward third base with a swing of the bat.  Whiffing the ball was a near-certainty when stepping left, and my Dad would remind me of that.  I needed to be stepping toward the pitcher if I wanted to get a hit.

It’s fall baseball season around here, and right now we’re doing coach pitch with my oldest son.  Last season was t-ball, so it’s a bit different for many of the kids to see the ball flying toward them while in the batter’s box.  Some of them are flat-out afraid of the ball, and they make the same mistake I did – they “step in the bucket” to get out of the way of what they think could be a dangerous pitch, or they back off only to realize it had been a strike all along, ideal for hitting!

Traders are frequently afraid too…

Getting into trades is hard for some.  For others, it’s about staying in their trades and not bailing out too soon.

Get smaller.  This promotes clarity of thinking because the money is no longer by far the greatest focal point.  The smaller the position, the lighter the damage could be if it fails and the smaller the profit will be if it works.  The advantage of that is that it forces a return to the process of good trading, of making quality decisions based on what the price action warrants.  It’s far less about reacting to P&L.  This breeds confidence and helps to eliminate fear.

Trust your preparation.  Working the charts and arriving at a trading plan for every position are two major aspects of preparation.  There’s more to it than that, and for each trader the specifics may vary, but there’s something freeing about pulling the trigger on an order with the confidence of knowing where you’ll get out – for better or for worse.  Make the time to make that plan, and you’ll feel less fear knowing you’re ready for multiple scenarios.

Remember that freak accidents are rare.  Yes, they can and sometimes do happen, but they’re called ‘freak‘ accidents for a reason.  Outside of a scheduled earnings release or corporate conference call, huge gaps are truly rare.  Yet, the thought of holding a position overnight strikes fear in the hearts of many traders.  Some are simply meant to be intraday traders, which is fine, but if you’re a swing trader, coming to grips with the likelihood of a big gap is a necessity.  It might happen, and it might be a gift or it might be painful.  But there will be a ton of trades which never gap huge that are ultimately the difference-makers for your trading success or failure.  Think in terms of sample size, and understand that the outlier won’t skew your results much at all over time even if you do come face to face with that overnight haircut.

Stepping in the bucket is a habit, as is bailing out of trades too early or staying sidelined indefinitely.  Getting out of that habit will take some intentional effort on your part, but it can be done and I hope these 3 steps help.

If you have found other ways to eliminate trading fears, let me know on twitter or Google+!

Take a trial of the Stock Pick Service to get my trades.